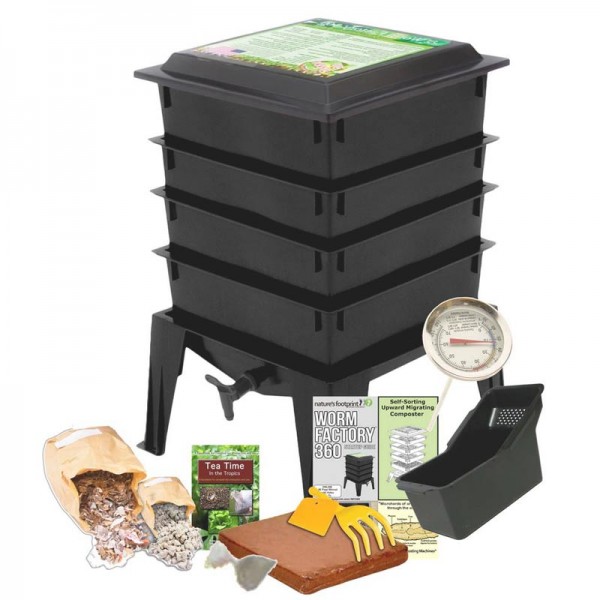 Americans throw away 34 million tons of food waste into landfills each year, more than any other type of waste. While traditional backyard composting has its place, the process can take up to two years and rotating it can become a chore. Luckily, there are more efficient ways to get worms to compost your kitchen scraps.

Housing your worms inside a worm factory is the quickest, easiest way for them to break down your kitchen scraps. As waste is broken down, moisture filters through the system, taking nutrient-rich particles with it-- a by-product of the composting process. This creates a nutrient rich, organic fertilizer (compost tea) which can be harvested right from the spigot at the bottom of the tower.

The Worm Factory 360 can house thousands of composting worms in a compact space. This eliminates all the work of traditional composting and yields a much more valuable end product. With the worms doing all of their composting in a concentrated, controlled environment, the compost produced inside a worm factory will be absolutely packed with nutrients, microbes and water soluble plant nutrients; everything your garden needs for a bountiful harvest.

Start with just the bottom tray and bedding material provided. Add composting worms and start filling the tray with household waste. The worms will process and recycle the waste into fine compost full of nutrients. When the first tray is full, stack another on top. Each tray has a grid bottom, so worms migrate upward as new food is added.

Adding household waste to the Worm Factory 360 is easy; just open the lid and toss the food in. You can add fruits, vegetables, grains, paper, cardboard, egg shells, leaves, and coffee grounds, just to name a few. As waste is broken down, moisture filters through the system, taking nutrient-rich particles with it. This makes it possible to harvest organic liquid fertilizer right from the spigot.

How Many Worms Do I Need?

The amount of worms you need will depend on how much food you will have available to feed them. Use the following questions to determine how many worms to start with:

If you are preparing fresh food daily with lots of vegetable scraps (peels, rinds, stems, outer leaves, etc) as well as often cleaning out old leftovers from the refrigerator, the maximum amount you should start with is:


If you are preparing fresh food a maximum of 3 times a week with some vegetable scraps as well as throwing away refrigerator leftovers about once a week, the maximum amount you should start with is: